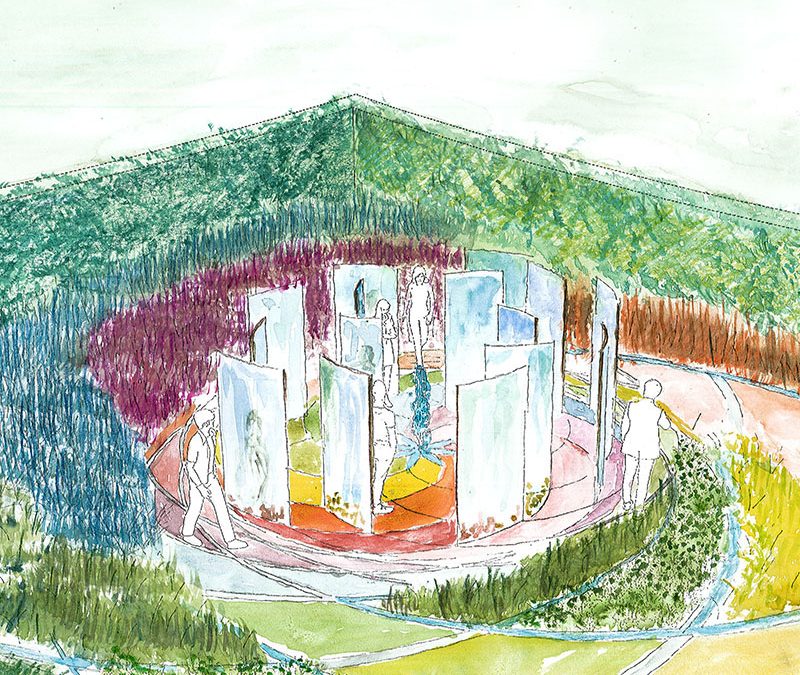 The thinking that brought me to the project arose from the observation of some vegetal structures and animal species very common in the place I live – pine cones, succulent plants, sunflowers, ferns, firs, snails, Alpine ibexes – and from some foods that we are used to eat – cabbages and pineapples. All these structures or living beings, as many others in Nature, are clearly described from two essential elements: fractals and golden spiral. The fractal is a geometric entity that has these characteristics: complexity, discontinuity and irregularity, iteration, self-similarity, fine structure. The golden spiral is a particular kind of logarithmic spiral that describes a huge number of natural phenomena.

The idea of the project is to create a harmonious place described by a fractal geometry in which the different plots shaped by the sixteen spirals meeting – eight in clockwise and eight in counterclockwise – interact and cooperate each other, in order to build a closed system without waste, as the natural system. The spirals interplay, in addition to create a lot of self-similar and infinitely repeatable plots, produces a big square in the centre of the garden. The plaza is entirely walkable and, seen from the top, it looks like a big mandala. It can also become a landmark for air vehicles or drones. Mandala is the archetype of natural order and universal harmony, whose geometry is described by fractals. The term, in Sanskrit language, means “circle”, in fact they are seen as a representation of the Universe by the Eastern tradition. In the same way, my project wants to be a small-scale model of the entire Universe: as well as Nature is self-sufficient, also my garden wants to reproduce a self-sufficient system in which low maintenance plants are gradually fed by the canals filled up with rainwater. Of course it is an ideal concept, not really practicable during the festival because I would need tanks and other systems that I cannot use, but it can be possible in private and public gardens. Actually the aim of my project is to inspire visitors for their own gardens.

The lines that build the spirals are: canals in most cases, stone slabs on the path, drawings on the paving inside the square. The meeting point of the spirals is the centre of the square, where a fountain arises. The jet is one-meter-high and it is surrounded by eight petals filled with water. It represents symbolically the spring that feeds all the canals and that allows the plants to live. Usually in the centre of the traditional mandala there is the Essence, in fact here there is the source that is the essence of life. The water moves from inside out, as indicating that the direction of life moves from inside out.

The plots shaped by the spirals meeting – very similar to pine cone bracts, succulent plant leaves, pineapple peel – has the principal colours of the chromatic circle. This choice was made in order to create a major correspondence between the project and Nature. The orange section and its symmetrical, together with the slices that run around the square, are dedicated to the path. This one, as well as the square, are realized with coloured sand, referring to the traditional mandala that is made with coloured sand by Tibetan monks.

The other coloured areas will host beautiful plants belonging to Poaceae and Cyperaceae families. The red zone will accommodate Carex buchananii, the red-violet one Pennisetum setacuem ‘Fireworks’, the violet one Pennisetum setaceum ‘Rubrum’, the blue one Leymus arenarius ‘Blue Dune’, the green one Phalaris arundinacea ‘Picta’, the green-yellow one Miscanthus sinensis ‘Gold Bar’, the yellow one Carex elata ‘Aurea’. These plants will enchant the visitors with the magnificence of their colours, the elegance of their structure, the delicacy of their foliage and flowering.

The plants choice was accurately made considering a lot of aspects. First of all, evaluating the colours that I needed, I didn’t want to use very different plants but I preferred to uniform the choice using species belonging to two similar families – Poaceae and Cyperaceae – to give more homogeneity and harmony. Secondly the areas had to be entirely coloured and well distinguished so I thought that the choice of plants with coloured foliage was more successful than the choice of plants with coloured flowers. The reason is that the flowers are just in some points, so the colour would be just in some points, but the foliage is spread, so the colour will be everywhere. Thirdly I had to foresee a permanence of the same colour of the plants from the beginning to the end of the festival, so I couldn’t choose plants with flowering colours different to foliage colours. Fourthly I had to measure the heights because, having spiral zones, the foreground plants, if higher, would have covered the background plants; so the height is progressive: from below upwards. Finally, I had to select plants both drought-resistant and frost-resistant, and these species are very resistant to both climates. All these aspects brought me to choose these families that, in addition to be extremely charming, can be used in many circumstances and for different environments: from the elegant garden to the wild one, from the ordered garden to the wavy one, from the Mediterranean garden to the Nordic one. Furthermore, I selected them because they need a low maintenance so they won’t require too many attentions during the festival period.

The square, entirely walkable and accessible from different sides (the principal one is on the back) will house fifteen reflecting surfaces which will fragment the space and will drive to the centre through a jagged and intricate path. These reflecting partitions represent the fractals because, first of all, they fragment the walkable space creating a discontinuous and irregular path, typical of the fractal geometry. Secondly they produce many rooms made of small elements – the rhomboid plots – similar to each other, as well as the fractal that is composed by self-similar elements that reiterate endlessly. Thirdly they reflect the surrounding space creating deconstructed and jagged images that repeat and resemble each other, as well as the fractals that are made of complex and similar fragments that reiterate. Finally, the surfaces will emphasize the charm of the garden because, reflecting, they will increase and accentuate the wonderful colours.

The objective of the project, first of all, is to recreate a natural, self-sufficient system on a small scale, in which only renewable sources – in this case rainwater and solar energy – allow the system to survive. Secondly I wanted to show how important is the balanced distribution of water in gardens and in Nature in general: a gradual, constant, diffuse feed, able to penetrate the whole soil and to water al the plants, increases the biodiversity. Indeed, if we compare the canals of the project to the rivers and the Poaceae and Cyperaceae plots to the spontaneous vegetation, we deduce that a balanced distribution of water in Nature (keeping clean the current drainage canals or functioning the existing rainwater collections), in addition to produce more biodiversity, would limit the natural disasters due to the floods. I think that if water was better divided and if it didn’t flow into a single point, usually the stream, we would avoid some natural disasters, because the river flow would be smaller and consequently littler the power. If we compare again the plots of the project to the spontaneous vegetation and we assume that each colour corresponds to a different plant in Nature, we deduce that, feeding constantly and widely the natural system, it would produce a huge biodiversity. Here we can clearly understand how plantations are the faster and more efficient way to destroy biodiversity and consequently the natural system.

If this close, self-sufficient and functioning system would be repeated endlessly, as well as a fractal, it would produce a better world, with less energy use, land use and human exploitation. Even before, if we realized this model in our gardens – possibly using low maintenance plants as the ones in the project – we would start to limit the environmental pollution, we would limit the irrigation costs and we would see the birth of new species with a consequent presence of new living beings.

Finally, the objective is also to show to visitors a delicate, elegant, colourful, low maintenance variety of plants, suitable for any kind of garden.

Any cookies that may not be particularly necessary for the website to function and is used specifically to collect user personal data via analytics, ads, other embedded contents are termed as non-necessary cookies. It is mandatory to procure user consent prior to running these cookies on your website.